This Friday, September 25, an interesting seminar on asset management in uncertain times took place in the hotel Gran Meliá Victoria. This Conference was organized by Mallorca 2030 and had speakers on various topics and of great interest. 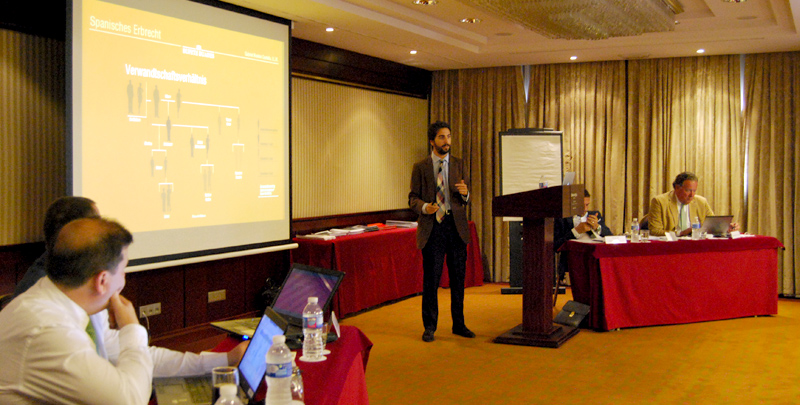 My statement, on behalf of the International Desk of Bufete Buades, focused on an explanation of inheritance law in Spain and its main issues. Issues such as (i) the degree of kinship, (ii) the types of possible Testament, (iii) “intestate” succession or (iv) the right of self-defense. I also shared the podium with a German colleague who commented on the same subject from the point of view of German law. Upon completion of our remarks, many questions were raised about which law was more convenient, and why.

Before embarking on the difficult mission of responding to the issues raised, we must briefly mention of the previously addressed issue of the new European Regulation 650 2012 legislation in this matter, applicable law, recognition and enforcement of judgments, the acceptance and execution of public documents in the field of successions mortis causa and the creation of a European certificate of inheritance.

That regulation was released in 2012, but its major themes came into force on August 17, 2015. From that date, in the event of death, the inheritance law of the deceased European will be that of his or her customary residence at the time of death. However, out of respect for the principle of autonomy of the will, it is admits that that law may be of the nationality of the deceased at the time of the election or death. This choice must be necessarily available “mortis causa,” either expressly by Testament, or being clearly deduced from it. And, of course, this can be modified or revoked at any time, using the same type of instrument.

Notwithstanding the difficulties that may arise in interpreting the location of habitual residence when the deceased spends time in two or more European countries (a theme we will discuss in a future article), raises the question of what is more convenient, to choose according to the Spanish rules of inheritance law or the law of inheritance according to German laws.

When making this decision, German residents in Mallorca should know the basic differences between the two inheritance systems.

First, we need to distinguish between types of wills existing in Spain and Testaments that we can find in Germany. In both countries, testators can establish their last wills in a Holographic Will (Eigenhändiges Testament) and in a public Testament (offentiches Testament) made before a notary. However, in Spain it is not possible to ratify a joint will between spouses, a mode that is viable in Germany, called “Berliner Testament.” Spain does NOT allow inheritance contracts (Erbvertrage), which are possible in Germany.

Once informed of the types of wills existing, we must know the limitations to the free disposal of the assets of the testator. In Spain, there is the figure of the legitimate heir, which should be a part of the hereditary property (Erbmasse) earmarked for the “legitimario” (mandatory inheritance system). In Germany, there is also the (Pflichtteil) legitimate heir; the uniqueness in Spain lies in the difference between the regions that make up the Spanish territory. In Mallorca, the reserved portion is different from that established in other regions–such as Madrid or Barcelona – and even other islands, Ibiza and Formentera. For that reason, we must know exactly the peculiarities of civil inheritance law in our place of residence before opting for this.

It is pertinent to mention that the differences between the regions also affect the different succession pacts that can be carried out if certain conditions are met.

Finally, “intestate” succession does not have much importance in choosing which inheritance law is most convenient, since, in such a case, the law of the habitual residence of the deceased is applicable (there is no choice of law in particular, but it is applicable at the place of residence). However, it is interesting to know that in Spain – without prejudice to the mandatory succession noted above – the order of heirs is as follows: (i) children and descendants, (ii) parents, on the assumption that there are no descendants; spouse (iii), (iv) siblings, nieces and nephews, (v) uncles and aunts, (vi) collateral relatives of the 4th degree and last (vii) the Spanish State, when none of the above exist. In Germany it is similar, although siblings would enter the second priority group and the spouse would receive a higher or lower percentage depending on the existence of descendants or not.

Once the different peculiarities are known, choosing the law that is more beneficial to the testator must take into consideration aspects such as (i) marital status, (ii) number of ancestors and descendants, (iii) the existence or not of inheritance pacts in the country of origin, (iv) the place of usual residence, (v) the limitations imposed by civil or statutory law and many more.